Wherever you go, be it the internet, a college or a bar, people always seem to pop up advocating their best way to learn a new language.

Some of them are enthusiastic language learners who swear the method they used to reach, or worse, are reaching fluency, is the single best method there is.

Others are language-learning gurus who have a product to sell that focuses on one dominant method only.

Luckily, more and more people are starting to realize that there isn’t one single best method to learn a new language. They agree that learning a language through just one method is a very ineffective way to progress your language-learning journey.

What You Must Know About Popular Methods

What makes a language-learning method popular? Is it its effectiveness? Or is its popularity directly linked to the workings of human psychology?

You’d probably be more inclined to use my method if I convinced you that it doesn’t involve stuff you don’t want to do. You’d also be more likely to believe the effectiveness of it because you’d want it to work well.

Effective language learning is a multi channel process. Experts agree that you learn best from various sources, engaging a multitude of the senses — not from just one method or course. Yet, commercially popular language-learning products often involve a single dominant method.

This isn’t to make the product more effective but rather because we crave simple recognizable answers. That’s how we’ve been conditioned by watching thousands of TV commercials.

I’m not saying this type of product is always useless. Nor do I say it’s bad to sell something — I might even sell something in the future myself. I just want you to be aware of the workings of it all. If they sell a language-learning product (a guide, book or whatever) based on one dominant method, they simply do that because it is more marketable than a language-learning system with many facets to it.

One Method to Take You All the Way?

According to the Global Language Monitor, the English language contains 1,019,729 words.

This number is somewhat inflated — not all languages reach those heights — and you only need a fraction of this to converse comfortably in your target language, but it does give an idea about the magnitude of your language-learning project.

So, that raises the question.

To learn a language well, would you depend on a single method to get you there?

Some of the most intelligent words spoken in this month’s mega post on learning vocabulary came from author and professor of General and African Linguistics: Lutz Marten.

I don’t think there is one right method. I think it varies from learner to learner. And indeed for the same learner over time.

This is not what we want to hear. We want to hear about specific methods that bring us what we desire — but it’s difficult to imagine truer words about language learning being spoken.

It may come as a surprise here, but actually, there is a best method for learning a language.

No, I’m not asking you to forget all that I just said. This method isn’t really about language learning and yet could be the most powerful method for learning a language ever invented.

The new best language-learning method is to step back and think a little.

You see, we’re always in a hurry to reach our goals. We put our blinkers on and off we go. It gives us the illusion of achieving. We feel there’s no time to waste — that everything that isn’t pure doing is going to hold us back.

In reality, we may actually be wasting a lot of time with this mentality.

Remember what your mum always said?

“Think before you act!”

And she was right.

Every minute spent in preparation, planning and contemplation could take ten or more minutes off of your total time to reach your goal of speaking your target language fluently.

Of course, there’s a law of diminishing returns. You can’t keep contemplating, you’ll have to start working some time. But it would be wise spending a considerate amount of time here, especially at the beginning of your language-learning journey.

How to Make Language-Learning Methods Work For You – Stages

Would you still use training wheels on your bike?

You’re way past that stage and it’s much more effective riding your bike without them.

Back then, when you were little, it was much more effective riding your bike with the training wheels on. Without them you would have fallen over and over — probably until not wanting to try any longer.

Using training wheels is an effective method to learn to ride a bike. But only when you’re just starting out. After that, they will just hinder you from riding the bike effectively.

It’s the same with learning a language.

What I’m really getting at here is that what methods you use really should depend on where you’re at. This is all about the age-old language-learning stages: beginner, intermediate and advanced. And giving those stages some thought is what could make your language learning so much more effective both in quality and time.

You could invent many more stages, but it’s really not about the names we give them. It’s about not jumping ahead when you haven’t completed a stage yet, and moving on to the next when it’s time to use different methods.

How to Make Language-Learning Methods Work For  You – Profiles

The stages aren’t fixed. They aren’t boxes you jump in and out of. But they are a great guide to make your language learning more effective.

But the stage you’re in, isn’t the only thing that determines your methodology.

Another important aspect to step back on and think about is your language-learner profile. This is all about you personally. 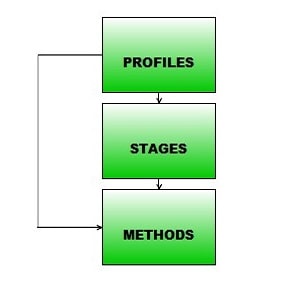 influence the methods but also the stages. A predominant characteristic of LLP’s is that they often determine the speed with which you go about learning a language. We’re talking about the speed of execution here, not necessarily the learning speed.

Let me give you some examples of what determines your LLP.

From Now Until Eternity

I think by now you get the point.

The methods you use to learn a new language should be heavily influenced by the stage you’re in and your language-learner profile. It all comes down to thinking about what you’re going to do — in a detached way.

Instead of just staying busy, think about what you’re doing a bit. Don’t dive in straight away but give it some consideration. It might be the best thing you ever did toward mastering your new language.

Make it a habit to do this and the results will surprise you.

Oh, and the next time someone shares with you the “best” method to learn a new language, remember to tell him or her the truth: the new best method to learn a foreign language is to just step back and think a little!