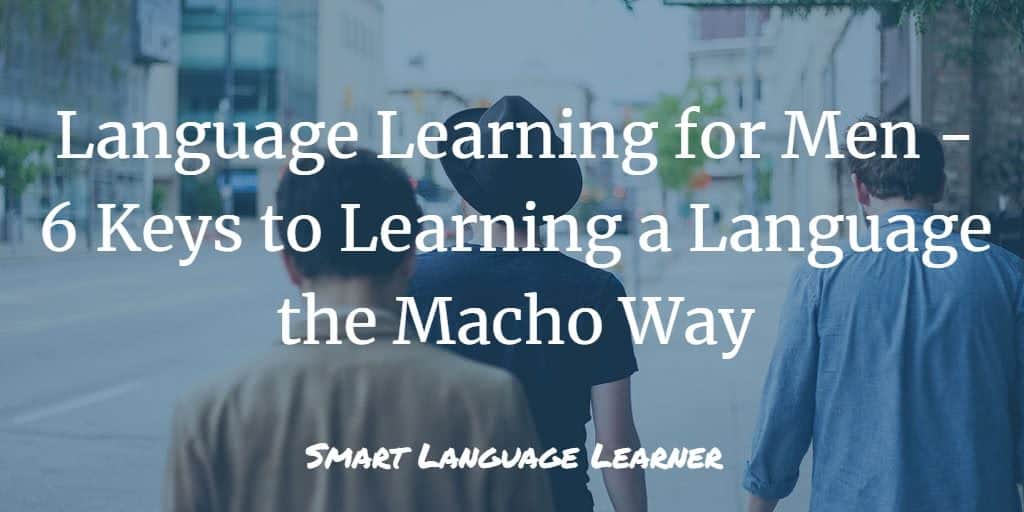 It’s easier for women to learn a language than it is for men.

They may have better memory… 1

And it is more socially accepted for a woman to study or practice her new language publicly.

Equal but Not the Same

Learning a language isn’t the same for men as it is for women.

Yet, most language learning advice out there is either aimed specifically at women, or gender neutral at best.

Men and women may be equal, but fortunately they’re not the same.

Learning a new language is more challenging when you’re chock-full of testosterone.

That’s why it’s necessary to keep some things in mind when embarking on a macho language learning journey.

1. Don’t Learn the Women’s Version of a Language

As a man, you can’t talk like a woman.

So you need to make sure you learn how men speak in your target language.

Practicing with a woman may be easier on your eyes, but it is bad news for your language skills.

You are much better off doing language exchanges with men.

Are all your native speaker friends women?

Make some male friends and learn from them.

Learning to talk like a man through courses and apps can be trickier.

With these kinds of learning resources, you practice the formal version of a language. Men and women alike talk in a rather rigid way.

Even so, you must pay attention at all times.

Do you hear men talk differently than women? If so, take note.

Once you’re at the intermediate stage, and you go out to play the macho, make sure you learn how a man speaks in your target language through social interaction.

2. Know that Learning a Language Isn’t Sexy – but SPEAKING One Is.

Does a man want to be seen learning a language?

Does he want people to know he’s learning one?

And this is a challenge. A hidden challenge, for some. They’re not really aware of it.

For a woman, it’s perfectly cool to study a language. You go, girl! But for men, it’s a bit nerdy.

So learning a new language isn’t cool. But SPEAKING one is. In fact, all other things equal, a man who speaks multiple languages is sexier than a monoglot.

Being bilingual —or even better, a polyglot— is an asset that makes you a hotter commodity in the social marketplace.

You’re also more likely to land a great job, which apart from the obvious benefits, improves your social status even more.

Social status isn’t necessarily about dominating other people, but it is important for your well-being.

So it definitely pays to learn a new language.

But how do you deal with the uncoolness of LEARNING a new language?

Ask yourself: Why isn’t it cool to study a new language?

Well, probably because most people don’t want you to do well in life.

They’re jealous of your discipline. They’re afraid they’ll be left behind.

If you’re surging ahead, you must be pegged back.

When you already speak a second language well, there’s not much they can do. You’ve already made it.

But when you’re still learning and vulnerable, they will try to ridicule you.

You know now why they’re doing it.

Those who say booze doesn’t help you with learning a new language are wrong.

But you do have to read the fine print:

Alcohol is addictive. Lots of alcohol will NOT help you learn a language, but it will help you get in trouble.

But in moderation, alcohol can help you:

*Loosen your tongue
*Make new friends, and thus…
*Dramatically increase your real-life practice of the language

So if you’re one of those guys that can control his alcohol intake, go for it.

(Just limit it to weekends only.)

PC explanation: Some women love watching sports more than most men. But generally speaking, it’s kind of a male thing.

By watching sports in your target language, you’re more likely to hear men talking to each other about their (almost) favorite subject: sports.

It’s a good source to learn how men speak.

If you’re into cars, make sure you consume enough content about that. Hear how they talk about their babies.

And talking about babies, learn how men express their admiration for women…

You blood needs to flow or else you won’t be able to conquer the world.

You need to burn off some of your physical energy in order to be able to sit quietly later, study, and be a good boy.

Research even suggests that increased blood flow and oxygen in your brain will make you a better language learner.

Is it tough to exercise?

Yeah, but that’s the point.

Overcoming the challenges of exercise will spill over into the rest of your life.

It will be easier for you to solve other “problems” life throws at you.

And that includes learning another language.

6. Use Your Masculine Energy

Think this post has been controversial up to now?

Warning: This ain’t gonna be politically correct. But just as we can say that women are good at certain things, we can also emphasize masculine strengths.

You see, men have one significant advantage over women when it comes to learning a language.

It’s easier for us to achieve things.

The drive to succeed – ambition – is more prominent in the male psyche.

Yes, not all men have more drive than women; there are many women who work hard and grind away to achieve their dreams. But generally speaking, masculine energy gives you an advantage.

If you don’t feel it, maybe you need to wake it up.

Get off your ass and start exercising!

You weren’t meant to sit still all day.

In the western world, men are quickly becoming a threatened species. 😉

Sometimes we need a little help to achieve what we set out to do.

Learning a new language is quite the undertaking.

Use the advice in this post and start working your butt off to achieve your goal of speaking a new language.