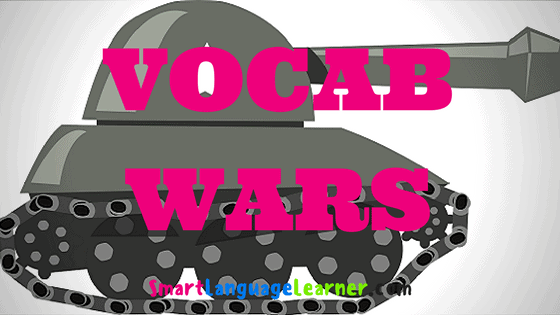 Time for something new.

I always thought it would be great to run some tests and publish the results on Smart Language Learner.

You know, testing the efficiency of language learning methods and sharing the results with you.

Some things simply can’t be measured.

You can’t measure exactly how much a pronunciation exercise has improved your accent.

You would know it has improved. Native speakers would know. But you most likely wouldn’t have any data to back your conclusions up.

Fortunately, it’s a lot easier to measure the efficiency of vocab learning methods:

Not complicated at all, and the results should be pretty accurate.

Well, I’m going to do just that in a new series called: Vocab Wars.

In each installment, I’ll try to learn 50 new words in 100 minutes by using a different vocabulary learning method.

After the learning sessions are over, I’ll do a test to see how many words I’ve learned.

Then — and this is the interesting part — after two months I’ll do a long-term memory test to see how much I still remember.

Rules of the Game

The long-term memory results are what really interest me:

Some methods are slow, heck, they might be so slow I won’t even be able to use the method with all 50 words. But maybe they perform better over the longer term.

So, will I come across a method that has superior long-term results? Or are all vocab learning methods basically the same?

Disclaimer: This isn’t science. Some methods may work better for me than for you. I also spend some time selecting the words to learn which preexposes me to them, and the time spent won’t be consistent for every method. Note that the words I use are in Spanish. I’m already pretty fluent in Spanish which makes it easier for me to learn new words. In spite of all this, I still believe Vocab Wars could give a good indication of the efficiency of various vocab learning methods.

When starting a new series like Vocab Wars, it only makes sense to start with something used an awful lot: Flashcards.

Let’s start with the most basic flashcard variety:  A single foreign word and its translation (on the other side).

So I loaded up Anki (spaced repetition software) with 50 Spanish words I didn’t know and their translations.

Before we get to the results, here’s a quick summary of how I studied:

Here are the numbers you want to see.

Take a look at the table below. Right now there’s only one method and its results, but with new Vocab Wars installments coming soon, there will be more so you can compare them.

As you can see, in the short-term memory test, I didn’t make a single mistake, even though I had to review 100 cards (front and back).

I guess that’s the power of spaced repetition at work. You focus more on words that give you a hard time.

In fact, I feel I could have easily stopped after the third session and still score 100% in the test. And it was exactly from the third session onward that it all became quite boring because it was too easy. I frequently found myself checking the clock.

What’s clear is that you can very easily cram 100’s of words in your short-term memory with nothing but straight flashcards.

So the answer to the title question of this article must be a resounding yes.

However, what I’m really interested in are the long-term memory test results. I will publish them in early April.

Before that, though, I’ll post a new Vocab Wars with short-term results.

And this time, I’ll be writing down sentences with the words I want to learn. That is: with good old pen and paper!

Some studies have suggested that writing down something is superior, memory-wise, to just typing it.

So let’s put that to the test, shall we?