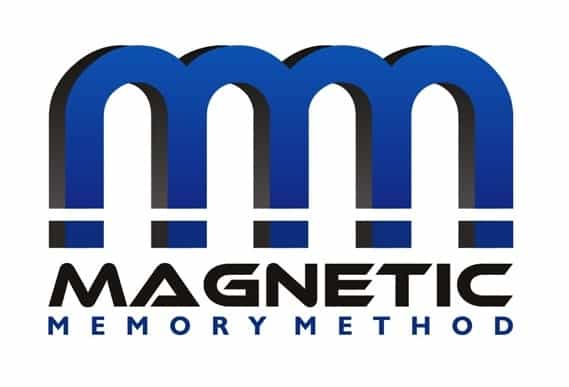 I gave the Magnetic Memory Method a test run.

I used the method to try to learn 127 new Spanish words.

I then tested myself and the results were surprising.

This post is a recap of my case study. At the end of this post, I’ll share if my initial positive conclusions still hold up more than six years later.

What Is the Magnetic Memory Method?

Before we get to the case study, let’s chat about what the MMM is.

The Magnetic Memory Method was created by memory expert and enthusiast Anthony Metivier.

He’s also the author of various books and holds a BA and MA in English Literature, an MA in Media & Communications, and a Ph.D. in Humanities.

The Magnetic Memory Method is all about memory palaces.

A Memory Palace is a mnemonic device to memorize and recall information by using your imagination.

In other words, it all happens in your mind.

The method recommends creating a memory palace for each letter of the alphabet of your target language and putting multiple mnemonic images in each memory palace.

These imaginary images represent the words you want to learn.

The more outrageous the images, the better you’ll remember them. And since they’re accessible only to you, you can use some pretty crazy stuff. 😉

The method consists of just a few essential steps:

The Magnetic Memory Method appears in almost all of Metivier’s courses and learning resources.

This post focuses on his main course for language learners:

How to Learn and Memorize the Vocabulary of Any Language

The course consists of 3 hours of on-demand video, 1 hour of on-demand audio, 8 articles, and 15 downloadable resources. You also get full lifetime access, and the course is also accessible on mobile and TV. 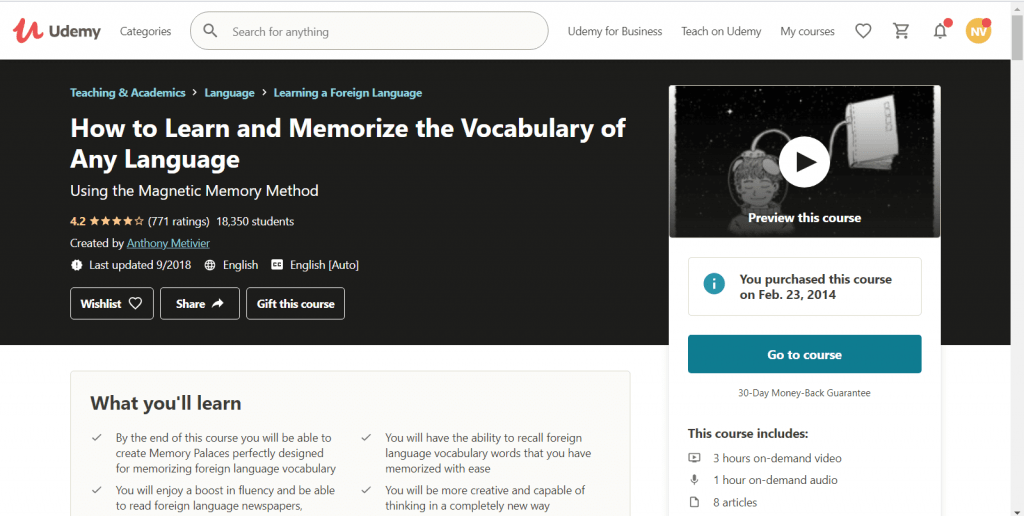 How to Learn and Memorize the Vocabulary of Any Language is mainly a video course.

Even so, apart from a background logo and subtitles, the course could have been audio-only.

Not that it really matters; it’s about the method after all, but just so you know…

The Magnetic Memory Method is based on methods used by many memory contest champions.

Anthony Metivier, the memory enthusiast he is, combined several of these methods into one: the Magnetic Memory Method.

But memory championships are different from language learning…

So the question I wanted to answer was:

Can you use the MMM effectively for learning foreign vocabulary?

And that’s exactly what my Case Study was all about.

I only worked with the Magnetic Memory Method 40 minutes a day, 4 to 5 times a week. So in effect, I had about 800 minutes to execute the case study.

However, I’d been doing quite a bit of pre-work, and I’m not counting that. This included:

BTW, I used the old-fashioned dictionary to select the words.

I know, every expert warns against using the dictionary to learn new vocabulary, and so do I, but in this case, it’s a matter of choosing what words to learn and not how. In other words, the dictionary isn’t the method but the source.

Before I started learning and memorizing the words, I put every word in an Anki flashcard deck, not to practice the flashcards, but simply to test myself at the end of the month.

I used this Anki deck at the end of the case study only.

I could keep on rambling about the Magnetic Memory Method.

You probably want to know how the case study went.

So let’s cut through the chase and give you some results.

During April 2014, I spent quite some time with the MMM. Here are some exact numbers:

I must admit that in the beginning, I did a few extra uncounted repetitions of the memory palaces before going to sleep. It was kind of hard to resist. 😉

The memory palaces are like having a basement with treasures. You always want to go down and take a peek. After a little while, I stopped doing it, though.

Throughout the case study, I attempted to learn 127 new Spanish words.

This means I learned a new word every six minutes. Or 6.68 words per session.

But how learned are they? 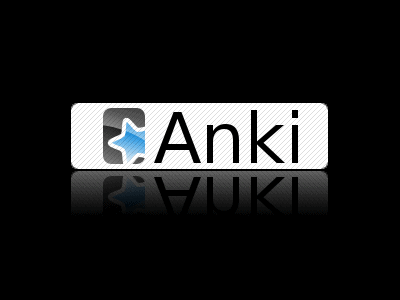 As I said earlier:

Before creating the mnemonic images, I added each new word to Anki, the flashcard app. The plan was to use the Anki flashcards to test myself at the end of the case study.

Keep in mind: I never practiced the flashcards at all; I created them just for the test and nothing else.

I chose to use Anki because it was an easy way for me to test the memorization of the words in random order.

This is important because when going through a memory palace, you do so in a fixed order. If the test also followed a fixed order, it would be easier to remember the words and thus skew the results in favor of the MMM.

Also, when you’re in a real-life conversation, you probably won’t have a minute to go through your memory palace to remember a specific word. Most of the time, you need the word … fast.

And fast it went.

The test, that is.

I recalled the 127 words in less than 7 minutes.

That’s an average of a little more than 3 seconds per word.

Taking into account the clicking of the Anki buttons and saying the word aloud, that’s pretty much an average of … instantly!

Now, in contrast to the repetition or rehearsing of the memory palaces, I didn’t conceive the complete images in my mind; that would have taken longer, of course.

For the last 10-15 learned words, I needed a little more time to recall them, but that was due to a lack of repetition. These were the words I learned in the last sessions, and I hadn’t practiced them as much.

So how many mistakes did I make during the test?

I made just one little mistake.

And that was for the word “emboscada” (ambush).

Ironically, the mistake was made in preparation. While creating the image in my mind for this word, I thought the word was “embosada” and not “embosCada.”

In other words, it wasn’t the method that failed here. It was me!

When creating the image, I didn’t double-check the word as I should have.

If it weren’t for this one little mistake—made because of a lack of concentration—I would have achieved a perfect recall rate.

To be honest, all through the case study, the results have really surprised me. I knew it was a good method, but I didn’t expect it to be this good.

I used the Magnetic Memory Method to improve my Spanish vocabulary.

In many ways, Spanish is the ideal language for the MMM because of its phonetic consistency.

You practically don’t have to learn how to write in Spanish. You just learn a very basic set of spelling rules, and you’re done.

It’s something that helped me, of course.

That said, maybe you shouldn’t even worry too much about the spelling. Just learn the words, what they mean, and how they sound, and the spelling can come later.

It is, of course, entirely possible to also let the images account for the spelling. I still did this with most words, but I imagine it’s much harder with languages like Russian or Mandarin Chinese.

What helped me as well was the fact that my Spanish was already at an advanced level.

Even if a mnemonic image doesn’t bring up the exact sound of a word (but a close approximation), I usually recognize it when a letter does or does not belong. Spending a little more time with the word before creating the image, like saying it aloud a few times, should have the same effect.

The How to Learn and Memorize the Vocabulary of Any Language course recommends a specific pattern of repetition.

If you learn a language with an alphabet of 26 letters and have a memory palace for each of them, you can rehearse one memory palace every day and thus repeat everything at least once a month.

This Smart Language Learner case study only took a month, so I had to do more repetition than you usually would. This helped reinforce the words in my memory but also left me with less time to create new memory palaces and learn more words.

One thing is for sure, the initial repetitions are gold.

Before doing the Anki test, I hadn’t repeated the first few memory palaces for about two weeks. Yet, I had no problem recalling those words because I had initially repeated them a lot.

Most people who haven’t tried this method think it’s complicated to create memory palaces and that every image should be perfect.

That couldn’t be further from the truth.

One of the things that surprised me was that even if I sometimes made an image that didn’t seem to work, or at least not for long, the associations made were strong enough to make me remember the word without problems.

Even after quite some time without repetitions, just seeing the starting image in my mind was sufficient (often, the mnemonic images feature some kind of crazy memorable action like an elephant jumping through a window).

Moral of this little story: ideally, you create a well-functioning mnemonic, but it surely doesn’t have to be perfect.

How to Best Use the Magnetic Memory Method

But the question is, where does it fit into your language-learning strategy?

It remains to be seen if the fantastic results hold up if you learn thousands of words. I think they would, more or less, but maybe that’s not what this method is for.

For now, I recommend you use the Magnetic Memory Method in one of two ways:

How Much Does the Course Cost?

You can buy the course as part of a bigger course package at MagneticMemoryMethod.com.

That could get quite expensive.

The Magnetic Memory Method Masterclass, for example, includes a host of other courses all focused on memory improvement.

You can find in it everything from remembering names and faces to memorizing math equations.

It’s quite the bundle.

Another option is the Magnetic Memory Method Fluency Package.

This package only includes learning resources for language learners.

Your best bet may be the Udemy version of How to Learn and Memorize the Vocabulary of Any Language.

This version isn’t as elaborated as the MMM Fluency Pack version, but its price is much more comfortable.

So chances are you’ll be able to pick it up for less than $30!

That’s very affordable for most people.

It was great fun to create these memory palaces!

To be honest, I wasn’t looking forward to doing the case study. I don’t consider myself a good visualizer, and it looked like a lot of work.

But right from the first session, I enjoyed it.

It’s more like play. As a bonus, you get motivated when you notice you remember much more than you thought you would. The origins of this method may be old, but to me, it feels like a novelty.

The Magnetic Memory Method is an exciting tool.

Even my wife was listening attentively when I explained the method to her. She used some of its principles to help my 9-year old stepdaughter remember the names of the human body’s major muscles.