An often overlooked aspect of language learning is pronunciation.

Many learners want to “sound like a native”, but then do almost nothing about it.

To sound like a native you don’t necessarily need more words. That helps, of course, but no one will mistake you for a native speaker if you sound like Tarzan all the time.

Problem is, we’re often unaware of the pronunciation mistakes we make. We need someone to tell us where we’re messing up.

A new App called Speechling can help you with this.

With a Little Help from … Your Coach

Speechling isn’t a complete language learning solution that teaches you all the basics and nuances of a language.

Rather, it’s a specialized tool that helps you improve your pronunciation. An often neglected, but extremely important skill of learning a language.

With Speechling you can advance your pronunciation skills in an efficient way.

You get feedback on exactly what you need to improve.

You can record your own voice, compare it with native speakers, and get valuable feedback from your coach.

With Speechling you don’t have to do those sometimes awkward video language exchanges. Just record your voice and send it to your coach for feedback.

You can send every audio you record to your coach and—24 hours later—you’ll receive feedback on it.

If your pronunciation is spot on, you’ll receive a thumbs up. But if a coach hears that you made a mistake, he’ll record an audio of his own explaining what went wrong. He also repeats the correct pronunciation.

Even though Speechling is mainly a pronunciation tool, coaches can also give tips on rhythm, intonation, word choice and grammar.

What Languages Can You Learn with Speechling? 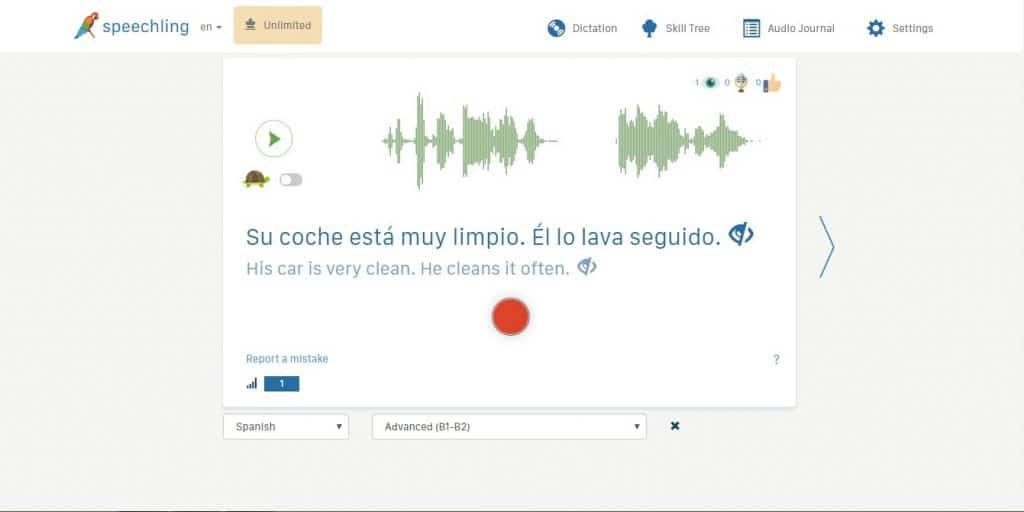 These audio cards have a sentence, question or image you have to interact with.

There are a few different kinds of audio cards:

Each type of card—except for the Dictation cards— gives you the option to record your own voice and send the audio to your coach. 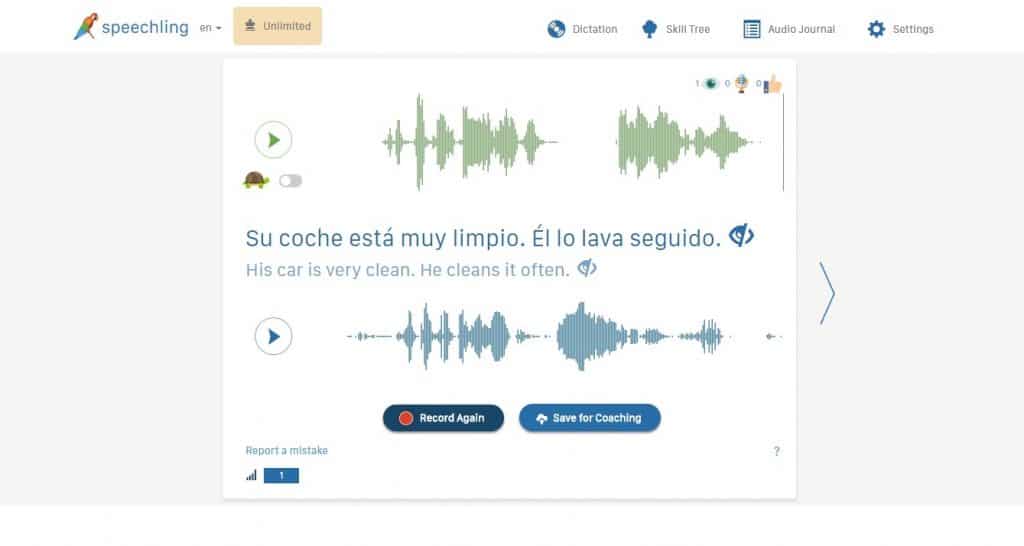 If you’re just starting out, it may be a good idea to stick with simple repetition and Dictation cards. But if you’re a little more advanced I recommend Describe the Image and Answer the Question cards.

They’re a lot of fun to work with and really put you to the test. These cards are open-ended, the answers aren’t fixed. This means that you coach will also give you tips on grammar, word choice, etc.

In the Audio Journal you can find a color-coded list of all cards you’ve sent to your coach. Here’s all the feedback you’ve received, as well. 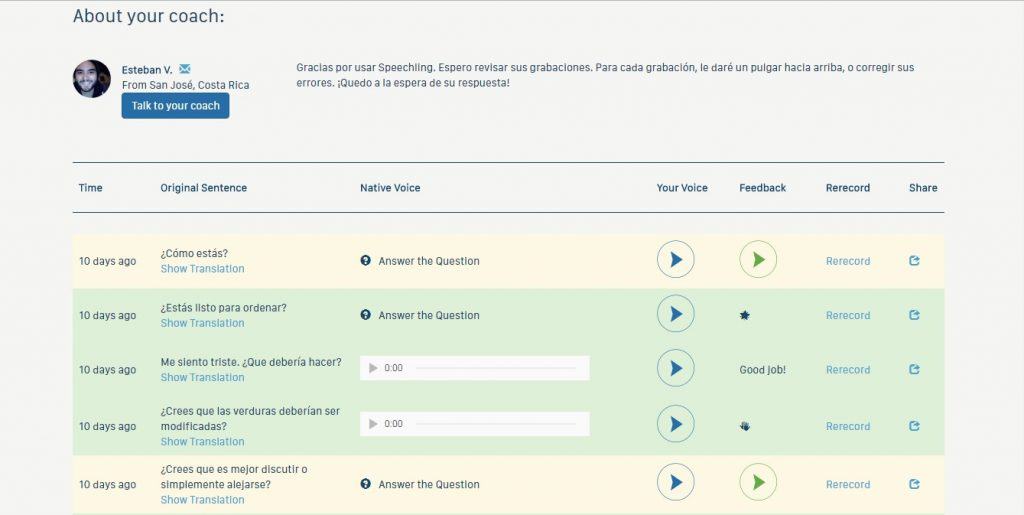 You can also re-record a card directly from your Audio Journal. Your coach will then review your recording to see if you have improved.

The Skill Tree Provides a Path to Better Pronunciation 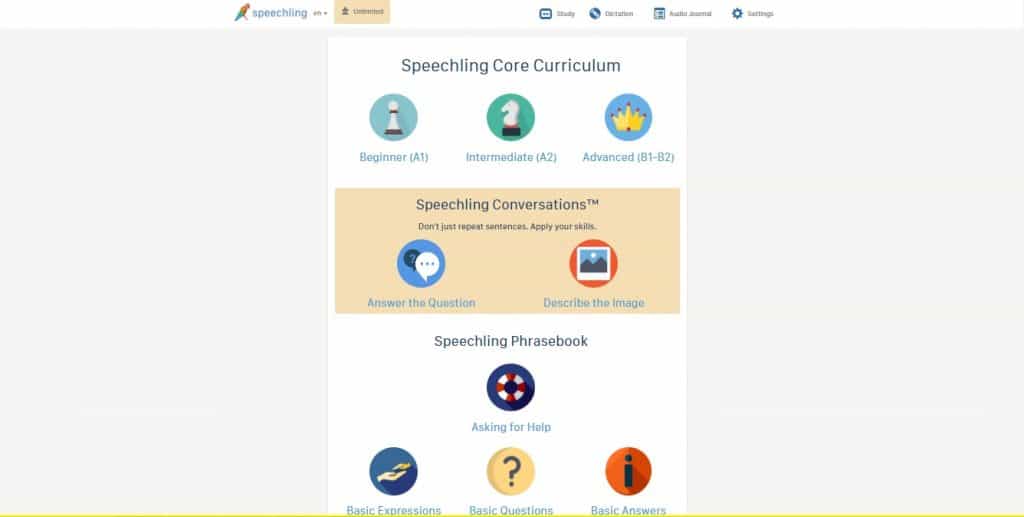 To not just keep working with random Speechling cards, you can go the Skill Tree section.

In the Skill Tree section you can find the cards in a more ordered fashion:

For instance, here you can find Speechling’s Core Curriculum. In the Core Curriculum, cards are ordered by level: Beginner, Intermediate and Advanced.

This lets you pick your level and makes it so you’re not wasting your time on cards that are either too easy or too hard for you.

The Skill Tree is where you can also find the Speechling Phrasebook.

Here you can work with cards based on fixed topics like: Basic Questions, Hotel, Bad Situations and the Weather.

This is cool if you have a trip to foreign country coming up, and want to practice situations you’ll most likely encounter.

Correct Your Fossilized Errors with Speechling

While testing Speechling I received some feedback from my coach.

To tell you the truth: some of it was solicited by making mistakes on purpose. Just to test the system.

But I also got some “real” feedback that made me realize I’ve gotten lazy with the pronunciation of some Spanish sounds.

And this is why Speechling is very useful to learners of all levels.

I wouldn’t start using it as an absolute beginner learner of a language, but I would incorporate it into my schedule as soon as two weeks in.

Pronunciation errors can get fossilized. And fossilized errors are hard to correct later on.

Your Speechling coach can spot them early on, so you can correct them before they get any worse.

I like Speechling. I think it’s a very useful tool to improve your pronunciation.

There’s a lack of tools that can help you with that, so Speechling is a more than welcome addition to the language learning community.

But all that doesn’t mean Speechling is perfect.

The biggest problem with Speechling is that it doesn’t tell you HOW to correctly pronounce the sounds that you have a hard time with.

The coaches tell you WHAT you say incorrectly and they will slowly repeat it for you in the correct manner.

This can be enough to self correct your pronunciation.

But some foreign sounds don’t have a similar one in your native language. In that case, you’ll have to find out how you actually reproduce a sound like that.

There’s always Google. As such, it shouldn’t be too hard to find information on how to pronounce the sound correctly.

Even so, this is definitely something where Speechling could do better.

Even something simple like images indicating lips and tongue positions would be a great addition.

What Does Speechling Cost?

Speechling has both a free and a paid version.

With the free version you get 35 corrections per month.

The paid version costs $19.99/month and gives you unlimited corrections per month. You also get access to the Audio Journal and all other features. With the paid plan you can also switch languages at any time.

Well, your coach has to review all recordings you send him through the Speechling interface. Some of the feedback can really help you advance. It’s also a lot cheaper than if you would go through this process with a private tutor.

I recommend Speechling to those of you who want to improve your pronunciation in one of the languages offered by the App.

If you’re interested in the paid version of Speechling, use the code SLL4NP at checkout to receive a lifetime 10% discount.