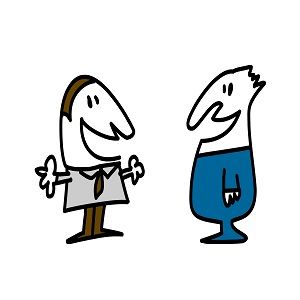 I thought I had it all figured out.

Surrounded by native speakers, probably for ever, there was nothing more I had to do but speaking to rapidly improve my Spanish.

Yep, just plain old chatting would shoot my fluency through the roof.

And so I let go of everything: courses, books, audio, exercises, you name it. All to the dust bin.

I filled my days with nothing but conversing. Man, It was fun!

After about a year, I noticed that my level of Spanish had barely improved. I still spoke with the same limited structures and with just a slightly increased vocabulary. There were even times when it seemed I was going backwards.

Admittedly, this was probably not really the case, but the progress I had made was disconcerting, to say the least.

Just Speaking Won’t Bring You the Results You’re After

Speak the language, use it! That’s the secret to fast and effective language learning, right? At least, that’s what the current language-learning scene is swaying towards.

Well, I know now, that if that’s all you do, progress will come slow, very slow. Even if you speak in your target language all day long, like I did.

The amount of new vocabulary and grammar structures you pick up by just conversing is surprisingly disappointing. Sure, if you do this for enough years, you may reach your desired level – but who wants to master Spanish in ten years?

I’m a big fan of learning from context, but it’s much harder to do through conversation, especially if you are a beginner. Native speakers speak fast – they fire off one word after the other.

If you’re not already at an advanced stage, you don’t really have the time to learn new words or grammar structures this way. It all comes and goes too fast. You need to either be exposed to them an awful lot, or spend a little more time training yourself.

Don’t Forget the Back End

I slowly started to realize that if I didn’t make an effort apart from conversing, I would not become as fluent as I liked – or at least not anytime soon.

So I started to go back to my old language learning activities, including the use of native content, with the hope of giving my Spanish a serious boost.

I quickly made impressive progress. And since then, I’ve improved immensely. It has made a real difference in my ability to hold increasingly complex conversations.

Just today, a guy who I was talking to told me that he’d had many Spanish students in his house, but with me it was like talking to another Costa Rican. Now, that’s probably just a little too flattering, as I’m sure people notice I’m a foreigner, but it doesn’t hinder the conversations in any way.

And it all turned around because I realized I had to do more Back-End language learning, as I like to call it.

Back-End work is like training, and the Front-End is the match. Without proper training you will embarrass yourself on match day. It won’t work. You need to be in shape, simulate and practice match situations etc..

So what kind of activities am I talking about? What are Back-End language-learning activities?

Greater Than the Sum of Its Parts

The most important thing to remember, especially if you live abroad, is to not neglect the Back-End work.

Yeah, the Front-End is where most of the fun is, but that joy could easily be increased ten-fold by doing the Back-End stuff as well. It’s much more enjoyable to be able to participate in any conversation and not feel like an outsider!

Using only speaking is like learning a new language through a single method, and that’s never the most effective way to do so. Actual conversing is important, of course, but so is the Back-End work. They’re both part of a greater whole. You need to balance them.

When you’re just starting out, the balance sways more towards Back-End language learning. This gradually changes, until, ideally, you won’t have to do any more Back-End work.

You can learn a new language through a thousand different approaches. Even if you stick to a poor method, chances are you’ll get somewhere, but for faster, and better progress you can’t ignore the two sides of language learning.

Pay attention to the both the Front End and the Back End, and you will be able to learn a new language faster.

In my language learning this was an important revelation. And one that has brought me significant improvements. What lesson that you learned has made the biggest impact on your language learning? Share in the comments below.