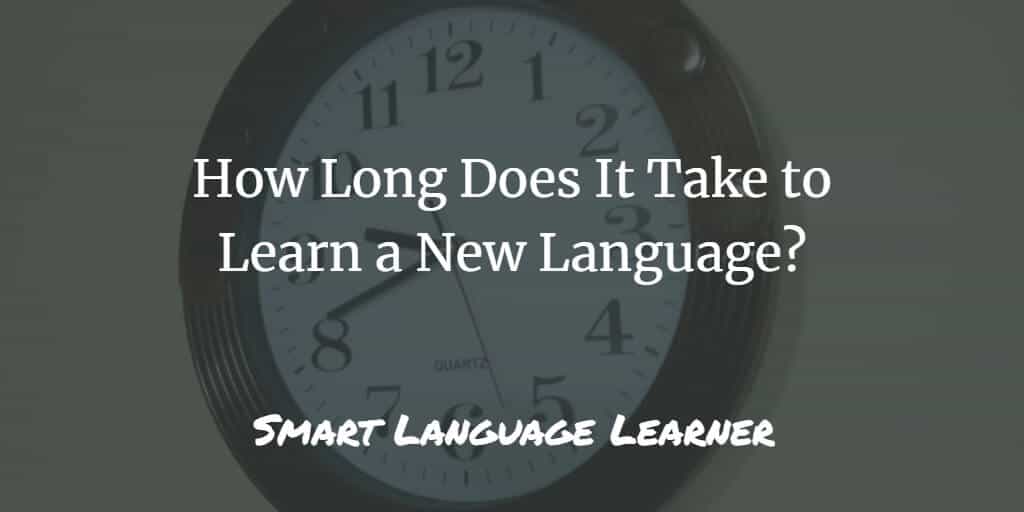 Ever since the days of Julius Caesar, people have wondered how long it takes to learn a language. (Don’t Google this, I made it up.)

Well, the most sensible answer is:

It depends on so many things!

Like how close your target language is to your native language, or how many hours a day you will devote to the learning process.

So it depends is probably the most accurate answer, but that’s NOT the answer I’ll be giving you today.

Learning a Language Takes a Lifetime

I realize that both answers are not what you want to hear.

If I were a beginning language learner, I wouldn’t want to hear it either. (“How dare you waste my time like that !?”)

But give me a moment so I can explain it.

Even your native language is subject to fluctuation.

This fluctuation becomes even more severe if you live abroad and you no longer expose yourself to the language.

It starts with forgetting complex words that used to come naturally to you. In the next phase, you will even forget some simple, frequently used words.

Some people have “lived” in their native language for 30 years, then went to live abroad, and 25 years later, they hardly speak their own language anymore.

These are people who have learned and practiced their native language for 30 years, and yet, they’ve forgotten most of it!

You are never done learning a language. Not even your native one.

I’ll explain why in a minute.

Why Do We Ask How Long it Takes to Learn Another Language?

With this kind of marketing floating all around the internet, it’s no wonder we have high expectations.

However, this is just marketers screaming for attention. They create the illusion that you can learn a language at an incredibly fast pace. In reality, they only cause confusion.

Then, when real polyglots rightfully say that learning a language is a long-term affair, we don’t know what to believe anymore.

We are confused. And this is one of the reasons we want to know how long it takes to learn a language.

But there is an even more important reason.

Why are we so keen on knowing how long learning a language takes?

Because the potential work of learning another language scares us!

There hides a mental weakness in asking the question.

We are not sure we can handle the job.

It is often the people who ask this question the loudest who stop learning a new language first.

When you’re going to learn a language, and you look at it as one big lump of months (or years) of work, then it’s always going to seem a mission impossible.

On the other hand, taking it one day at a time is a much healthier approach.

It’s a similar strategy to the one I use when I experience learning frustration.

Once you see that motivation comes and goes, you’ll no longer be at the mercy of it.

If you just do your daily work and focus exclusively on that, the whole “how long does it take?” question becomes irrelevant.

If we change our perspective and only look at our immediate work, it doesn’t matter how long it takes.

Besides, learning a new language is a lifelong endeavor of varying intensities. Sometimes we learn and study more, and other times things are more on autopilot.

You’re not always going to have to work that hard at it. Once you’re at an advanced level, a little maintenance here, and a few quick wins there is all it may take.

Learning a language takes a lifetime, but the hardest work is to be done in the first few years. 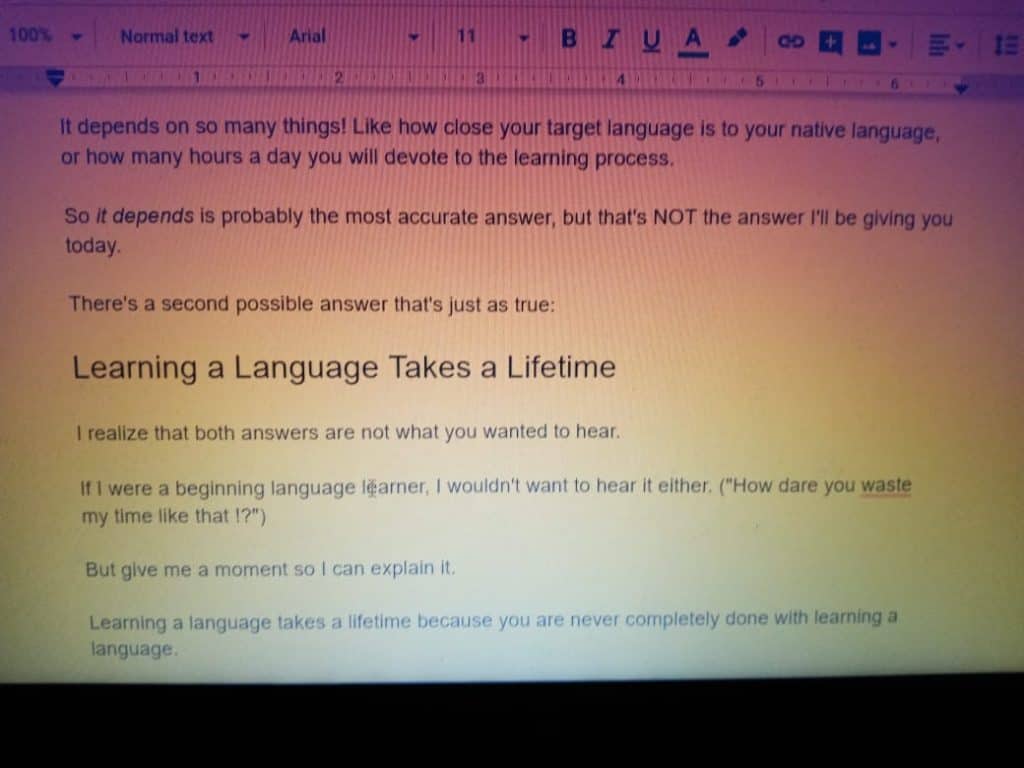 Here’s a Much More Relevant Question

Asking how long it takes to learn a language is way too ambiguous.

Too many factors at play here.

As I said, it takes a lifetime to learn and maintain a language.

The good news is that it takes much less time to be able to use your language in the real world.

Almost everybody who learns a new language wants to interact fluently with native speakers.

That’s where the speak from day one philosophy (Fluent in 3 Months) comes from. Converse with native speakers even if your foreign language skills are pretty much zero. It promises you the reward without doing the work.

Don’t fall for that! Language learning can be fun and exciting. But also challenging, tedious, uncomfortable, and outright excruciating. No pain, no growth.

…a much better question is: how long until I can interact with native speakers?

Well, with a little work on your part, depending on the language, you can converse with people after six months or so. Not necessarily complex conversations, but enough to get by and get by well enough.

And once you’re at this level, the hardest work has been done.

Now, don’t take that as a license to rest on your laurels. That wouldn’t be a wise thing to do.

But now you can learn through interaction with native speakers and real-world resources.

It doesn’t necessarily get easier, but it sure gets a heck of a lot more exciting (and sometimes awkward too, let’s just admit it;-)).

Some Kind of Subheading to Wrap It All Up!

I have seen the well-intended blog posts of other language bloggers with calculations of how many hours it would take to learn a language.

If your mind must settle on a number, they can be decent resources.

But the numbers are pretty random.

If, for example, I use inadequate language resources, it may take ten times as much time as it would using top-notch resources. (I probably wouldn’t even get to fluency!)

The same goes for if I use excellent methods but at the wrong time, e.g., conversing with native speakers in the early stages of learning a language.

Either way, and I keep getting back to this, learning a language takes a lifetime. You’ll never be done completely, not even in your own language.

So you better pick your new language well!