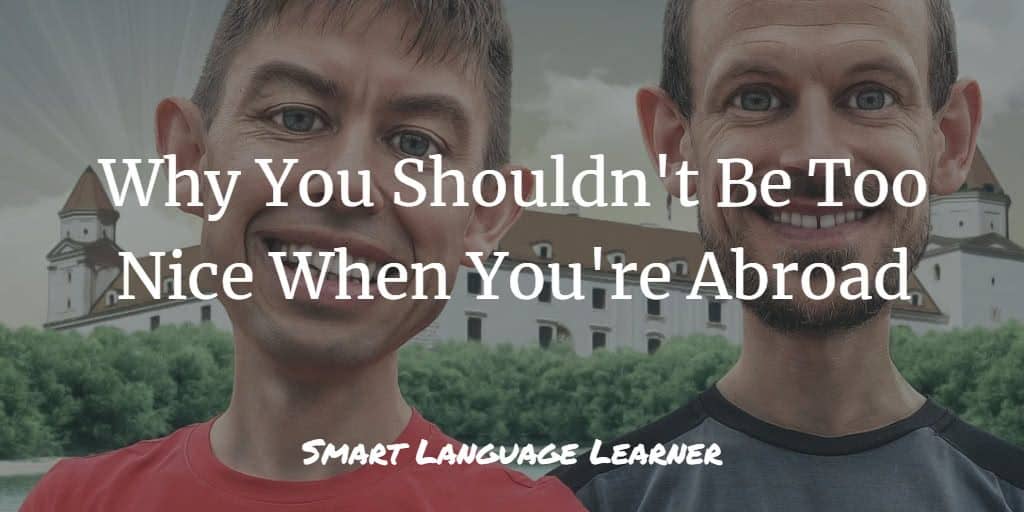 The average Western tourist (or expat) acts way too nice when abroad.

An insecure attitude takes possession of him as soon as he sets foot on foreign soil.

His eagerness to be accepted by the natives is written all over his face.

Now you might think … so what? Someone who wants to be liked. Big deal!

But in underdeveloped countries, there are still some unwritten social laws.

And such open attitudes can get you in trouble.

The Tribal Nature of Humans

Whether you like it or not, we as humans have a tribal nature.

It is not all of what we are, but it’s an important part of us. It’s in our DNA.

In the “developed” world you regularly hear people accusing others of being “tribal,” especially when it comes to politics. But the people who are against this tribal behavior, ironically, also form a tribe.

Let me tell you: It makes no sense to ignore this tribal nature, or to feel superior to it. Especially when you go abroad.

Because if you, as a westerner, visit a less developed country, there will be threats around the corner that you don’t see as much in richer countries.

In essence, you are leaving your tribe to surround yourself with another.

And this makes you insecure and vulnerable.

Sure, you can use your rational mind to suppress these feelings…

But on a reptilian-brain level, you will begin to think:

“There is no one like me here, nobody of my tribe. I’m alone. No one’s going to help me here. If they want, they could throw me into the soup and eat me.”

Your knee-jerk reaction, then, is to beg for acceptance and act like an extremely nice person, even if you know you’re not.

And this works well with some people.

A man is a symbol of physical strength. The protector of the tribe.

Whether you really have physical strength, your attitude determines a lot.

If your attitude is too aggressive, you become a threat to someone else… with potentially serious consequences.

But if you have an insecure attitude – and you act all nicey nicey – you radiate weakness.

Or at least, that’s how many people will see you.

In less harsh words: you’re too open. “Come on in” is the message you send out. You let your guard down. And that makes bad people perceive you as weak.

And if you are “weak”, you are an easy target for robbery or public humiliation. They might even sexually harass, or even rape your wife or girlfriend.

If you walk the streets with your happy, innocent attitude, evil people can smell from a distance that you are easy prey.

And it’s not just men: women who are interested in the money and privileges of western men will also see you as easy prey, if you insist on acting like a super nice guy.

At best, this can cost you a lot of cash.

At worst? Well…you fill it in.

On a biological level, they must carefully choose whom they want to mate with. They’re looking for the male with the best genes to reproduce with.

They have a “filter” to accomplish this.

Roughly speaking, this filter ensures that they reject certain men by acting unkindly to them, and that they act kindly to men they are interested in.

Men know this. Or rather, they feel it at an unconscious level.

If you’re going to be all nicey nicey, understand what you’ll be doing:

In underdeveloped countries, most men will interpret a woman’s kindness as sexual availability.

I don’t have to tell you what kind of problematic situations can arise from this, right?

You’re already physically weaker than most men, and then you’re going to be kind with every guy you see!? Not good…

Be Reserved, Not an Asshole

You’re insecure and feel the need to act nice bubbling up.

But…you know now that acting too nice can have negative consequences.

So what do you do?

The antidote, and only solution, for this kindness syndrome is to have a reserved attitude.

That is, until you have gathered enough information that indicates someone can be trusted.

When that’s the case, you can slowly increase your kindness towards this person, men a little faster than women.

When I say “reserved,” I do not mean be an asshole.

The average tourist/expat is too nice, but there are a few who think they are superior only because they happened to be born in a rich country.

I see them here in Costa Rica with some regularity. They treat the locals badly and act as if they run the place.

This isn’t being reserved, and is certainly not an attitude that benefits you.

So don’t be an asshole!

If Someone Is Too Nice to You

Just as you being too nice can cause problems, it can also be tricky if someone is too nice to you.

People generally aren’t that kind to people of another tribe…and certainly not out of the blue.

That is, unless they have a reason to do so, or are acting out of moral superiority or snobbishness. (The latter basically only happens with people from rich, developed western countries.)

So when you’re abroad and, out of nowhere, someone comes up to you acting super friendly, alarm bells should ring.

Usually these people want something from you. Typically, it’s money in one form or another. They may even take it from you if let them come too close.

Some are very sophisticated and willing to let the “friendship” grow in order to get what they want later on.

Are there exceptions? Sure, but you should follow the law of averages and be reserved about your new “friendship”.

So how do you make new friends then? Simple. Most experienced travelers and expats do this:

Once they know one or more natives they can trust, they use their friends’ judgement to find out if they should get involved with someone or not.

Natives know their country… They know where the dangers lay… And—most importantly—they know many people and their reputations.

This does the trick with a pretty good accuracy rate.

In any case, it sure beats following your “gut” feeling, which is nothing more than glorified gambling.

We westerners often have this fantasy about faraway foreign countries where everything’s supposed to be better.

Turns out: Some of it is. And some if it isn’t. It’s surely not all sunshine and roses.

However, visiting (or even living in) these countries can be an incredibly rich experience.

But only if you go mentally prepared and with realistic expectations.

Respect the people, but don’t go too nicey nicey or you might regret it.