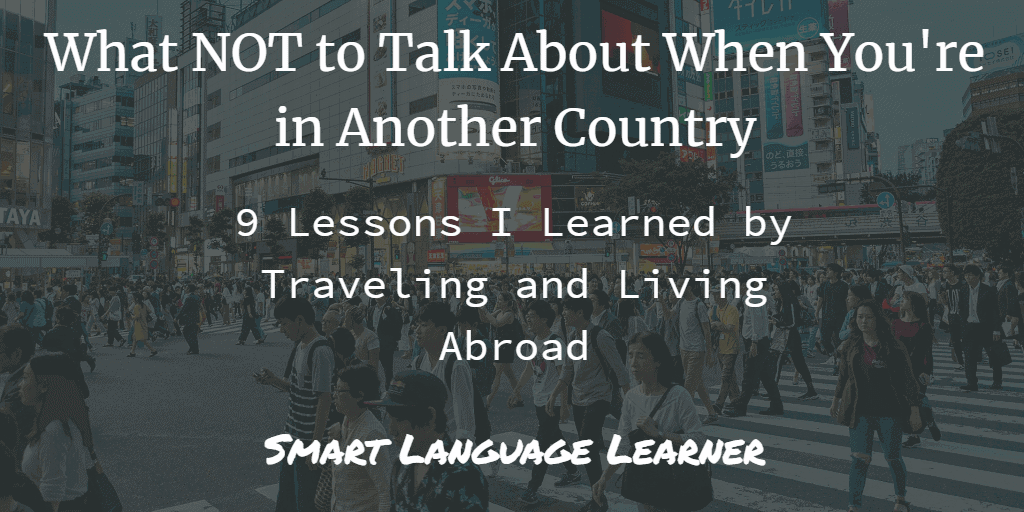 So you’ve made it…

You can now speak your new language well enough to…

1) Talk about more than just the weather. 2) Say more things than just “your country is nice” (Benny, is that you?).

Everything you’ve worked for is within your grasp. You can really start conversing with native speakers now.

You’re ready to travel to the country where they speak your new language.

When you’re there, you just go out and talk, right?

Well, you may want to think again.

In many countries, especially less “developed ones”, the culture is vastly different from ours.

And using our customs may not only be inappropriate, but can even put your life in danger.

So here are nine lessons I’ve learned about what not to talk about when abroad.

Most of them I learned the hard way. I’m sharing them today with you, so you don’t have to.

Sharing your political views with foreigners; letting the people know how you see the world.

Politics is a sensitive subject in many cultures.

This difference isn’t so clear in other cultures…

In other words, challenging someone on his or her opinions —debating, so to speak— is viewed nearly the same as physically attacking somebody.

People of other countries are not people from your tribe.

And by having discussions about politics, you might end up in a lot of trouble.

So stay away from it.

In the west, we debate religion fiercely but freely.

We build it up, we tear it down. Nothing is holy anymore.

This couldn’t be more different in many other countries.

There, religion is holy. Untouchable…

The slightest hint of doubting the truthfulness of religion can offend people.

Maybe you don’t believe in anything and you have turned that into your religion.

But don’t be an evangelist of that belief in another country.

Unless… you want to seriously piss many people off.

Even though you hold on to them for dear life, your opinions do not have much value.

They’re not going to change the world.

Because realizing this will make you a better traveler… and a much better expat.

… unless your opinion is the same as the person you are talking to.

In casual conversations, it is expected that you sort of agree with almost anything they say.

A conversation is a social encounter. Disagreeing —as we know it— is ASOCIAL.

Of course, this doesn’t mean that you should never disagree. But when in a conversation with a native speaker, make sure you disagree in the politest way.

If it does get a little out of hand, add in some white lies as necessary.

Honesty looks and smells nice, but it doesn’t get you out of tricky situations.

If you receive guests in your house, you do not expect them to say bad things about your home.

That would be rude.

So why do that when you’re visiting another country?

In many countries people are extremely proud of their country, even if it isn’t doing so well.

So if you start criticizing the country, its proceedings, and how it’s run, you will offend people…quickly.

Most of the time they won’t even let you know. But once they do, it’s often too late.

At best, the relationship will be damaged beyond repair. At worst, they will attack you verbally and/or physically.

5. Don’t Brag About Your Country

If your country is better off than the country you’re visiting, it isn’t because of your personal accolades.

Other people and other things have caused it. Some good and beautiful, others brutal and disgraceful.

Either way, there isn’t much to boast about.

It’s just random luck that you were born in a rich country, anyway.

Boasting about how good your country looks in comparison to the one you’re visiting will only accomplish one thing:

You will offend the natives by making them feel inferior to you.

And nobody likes that…

This one is pretty obvious… hopefully.

If it’s not, please stay home.

The more you show what you’ve got, the more the bad guys will want to take it from you.

But not only that…

You’ll also be bragging about your wealth to people who may have a lot less than you.

Even the smallest mention of something you possess can be interpreted in this way.

Don’t talk about your possessions.

Travel is exposing yourself to uncertain circumstances.

And when you don’t know all the potential dangers, you don’t want to reveal your cards. That could lead to trouble.

By being all honest about yourself, you open yourself up to a lot of sh*t.

We can only afford honesty when there aren’t SERIOUS consequences for being honest.

Unfortunately, you’re in a situation in which you probably can’t afford it.

Nobody needs to know you’re afraid of this and that. No one should know you don’t like esto y eso.

Keep your cards to yourself.

Acting all nicey nicey with people you don’t really know is another way you can get in trouble.

If you act that way, you’ll make for an easy target for all kinds of sons of bitches who want to exploit you.

Keep everything you’re afraid of to yourself…especially if you’re a man…who is supposed to act macho in most non-western countries.

And if you don’t act like that, you will be seen as weak.

Pretend to be tougher than you really are. If people think you are a sissy, you will be easy pickings in their eyes.

Women should act reserved, as doing otherwise might signal sexual availability to men. (Unless you really are sexually available to somebody, of course.)

8. Never Compliment the Beauty of Someone Already Taken

Both men and women can get very angry if you compliment their partner on their physical beauty.

Especially men, who must defend their princesses against all the dangers of the evil outside world. Yeah, they still have some pride left…

If you compliment a guy’s woman on her beauty, he will see it as an attempt to hit on her.

Not a comfortable situation to be in…

In this world, full of beautiful people, only go for the available fruits.

Turns out, not that many people…

In some cultures it’s absolutely not acceptable to talk about sex.

In others, like Western culture, you will not be spared of even the raunchiest details.

In fact, you may be so used to talking about sex, that this trait automatically travels with you to a foreign country.

In most cases, you should leave it at home.

In the West, the way we talk about sex is out of control.

Sex is largely a private matter and most people in the world view it this way. It’s indecent in many cultures to talk openly about sex.

People will look at you funny if you suddenly start to talk explicitly about the “romantic” adventure you had last night.

But there’s another reason not to talk too openly about “what you’ve been up to”, and it might be an even stronger motivation to keep your mouth shut:

Nobody wants to “be” with someone who reveals everything to everyone afterwards.

They will think twice about sharing a bed (or a kitchen table) with you.

Who Are You Anyway?

When we travel to a culture we don’t know much about, we tend to talk like we always do… Even if it’s in another language.

Gotta be yourself, right?!

Maybe … but are you actually one single person?

There are several versions of yourself.

And when you go to another country, you have to bring out your reserved self.

Just be a little less outgoing than you normally are, and you’ll be fine…